Crash landed on an alien planet without any weapons to defend yourself, you find a support drone that can help you on your way. Can you use it find new ship parts and get off this planet?

I made this game for VimJam: Collectables in less than a week. The theme was "There and Back" with a focus on "Collectables". This inspired me to do a really tiny retro Metroidvania style game where you collect additional abilities in the form of tiny robot friends.

Unzip the zip file and run the EXE.

Fun Metroidvania, played it a couple of times and got 100% under 9 minutes.  Personally I really apricate the slight delay from pressing the attack button and the attack coming out.  It's like the Castlevania whip in terms of length and serves the same purpose of making the attack feel like you are attacking with something that isn't a natural extension to the player making it feel natural for the visuals.  I liked how Ray was mostly used mostly used for puzzles rather than combat as it kept Boxer form being useless.  The level design for the most part excellent.  The figure 8 design made the exploration fun and the addition of more enemies/obstacles as you did backtrack made older parts fell fresh, especially exploring with Coil.

I do wish that Coil would stay out a split second longer as the sort length he stays out is a bit jarring the first couple of times you use him, but you do get use to it.  Also the game would of benefited from a wider screen IMO, like the 4:3 retro resolution is fine for aesthetic but it does make some jumps uncomfortable.  Namely the string of mushroom jumps over the lava pits, and more over the jump on the second floor where you have to jump down to the mushroom with the enemy walking in front of it, because you don't know how wide that platform is and if you jump with him offscreen he will know you down the the first floor.  Also encountered a small "bug" where I deployed Coil and kept the momentum with hurt animation as I bounced off Coil covering a lot of ground.

But an all in all fantastic experience that would of fit squarely with any NES game in terms of gameplay and style.  Really fun to play and a charming overgrown landscape to explore.

Thank you for playing! I definitely agree that I wouldn't have used 4:3 if I weren't going for the retro NES aesthetic, I was just in the mood for a bit of intentional jank.

Played this game a few times because it's very cute and a blast to play. I love the concept, and heck, even just 'pointing' at enemies before getting the B.U.D.D.s was fun t'do.

The game has a very good retro style, and feels very Castlevania 2 and Monster Party-esque, and succeeds at being way better than both. All in all, a great game, and definitely worth the time to download and play! c:

I love the retro art style! The awkward controls remind me of old school games.

I like the concept! I felt a bit defenseless at the beginning so I would like to get the boxer guys a bit sooner.

Anyway, good job one this one!

Thank you for playing it! 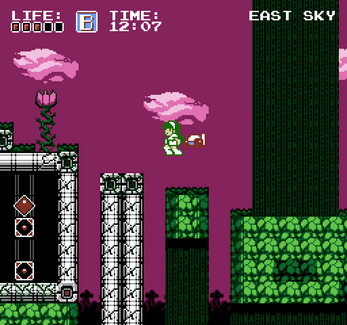